Got a lot of imported geo containers (for example from FBX import) and want them all in one geo subnet?
Object merge, then use wildcard! "../../pattern*)

As you might know, primitive normals can be visualized in the viewport, but are not a geometry attribute such as "N" on vertices or points. That makes it hard to set them, especially when fixing stuff you cannot control. In my case OSM data had randomly flipped prims - luckily all should point in one direction. Grouping them with the VEXpression @N.y < 0 or somehing and then reverse-ing the group did what I wanted.

Camera focus on object (for DOF)

Suggestion: Add this to the 'Clear Texture Cache' Button in the Texture tab. (Would not hurt if sidefx did the same)

Stamp inside a switch

This is very handy if you want to switch between random inputs to create alternating copies. At first, let's prepare the copy SOP expression (in the stamp value field, of course)

That means: output a random value between the number of inputs in the switch. Let's call this value "sw". Let's head back to "switch1" and enter the following in the "Select Input" field: stamp("../copy1","sw",0)
Lazy guy tip: If you want to alter probabilities but you are to lazy to do so in a function: Just connect the same input multiple times - it will of course be picked up with a higher chance by the copy SOP!

(backticks are for use in a string field, as in a group input)

Use Cop/Imp op as texture

Let's jump through some hoops to do copySOP-Curve-Magic: 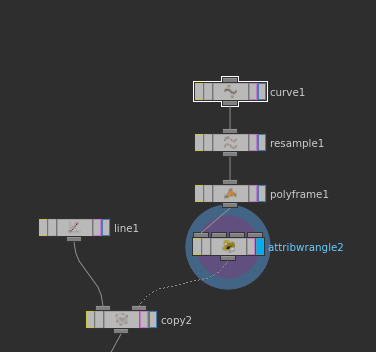 Ever had that problem? You have 20 parts imported from an obj or something and want to scatter a random one over something?
There may be a really easy way, but this python snippet (don't forget to add a 'seed' channel) will do the trick.

It will also delete all geometry not belonging to the chosen group.

Fetch attribute from other node

Use "if" in expression field, e.g. in AttribCreate

OSX: Return of the delete key

Slow save speeds over fast network? 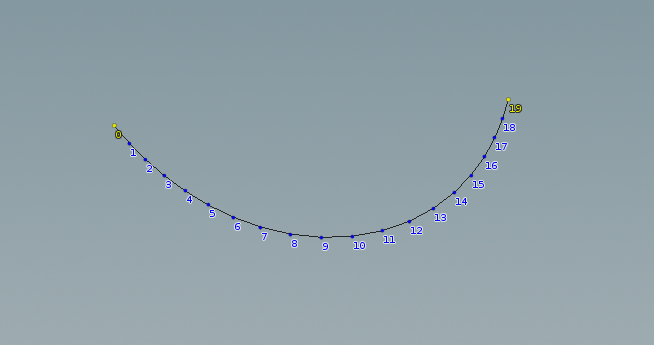 Sometimes (for example in curves) I want to select the first (easy: '0' :) and the last point. There has to be a better way, but $NPT-1 did not work for me. Instead I used

of a node in the tree above to select the last point by number.
A second method would be to group the points and set
0 $N
as pattern. Seems to be a better option.

Length of a curve 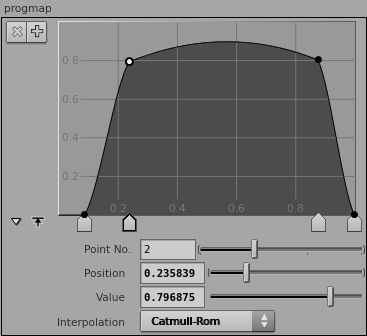 The ramp parameter is a great and easy way to map a value and control it interactively. That way, procedural effects (e.g. in animations) that look very linear can look more natural. Also, it's an easy way to quickly reverse a progression, pingpong it or any other modification.

The last value is the component index, so using a float ramp, that would be a '0'. If it's an RGB ramp, it corresponds to the color components. Also note that the position must range from 0 to 1, so taking the above example, a practil way of using chramp() would be

Ivy simulation in VEX My take on a classic - growing vines over arbitrary geometry. input geo > scatter > VEX Some observations from the outside world (picture by me): Color is function

More rocks. Recently, in need for some rocks, I stumbled upon this: http://forums.odforce.net/topic/10798-procedural-stonesrocks/ A post I made some time ago - after all I thought that I could